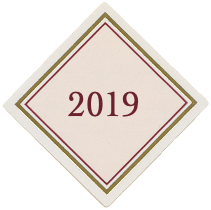 2019 is a vintage marked by a cool spring, then a hot, dry summer, so harvesting was at a normal date but with exceptional maturity and concentration.
Winter 2018-2019 was amongst the warmest ever recorded, so much so that there was virtually no frost at all! This mildness brought about rapid regrowth of the vines from the end of March. Most fortunately, the months of April and May proved to be rather cool, which delayed bud-break and the rest of the vegetative season. Vine flowering was therefore not in full swing until around 15th June on the Côte de Nuits, which foresaw harvesting towards 25th September.

Flowering was very much spread out and stormy outbreaks brought about flower-shatter and variable-sized grape bunches. Once flowering was over, giving way to favourable weather, vines grew very rapidly and the different vegetative stages followed on, one after another. The months of July and August were hot and dry, but a few storms at end July allowed blockages due to water stress to be avoided. At the end of August, ripeness was already well on track and the weather for the weeks to come led us to bring forward the harvest, initially foreseen for around 23rd September, by almost a week. The beginning of September proved to be very hot, in fact, bringing with it lightning progression in terms of grape ripeness.
We began harvesting on 17th September on the ‘Côte’ and ended on 27th September in the Hautes-Côtes. As in 2018, the state of health of grapes was absolutely perfect, sorting virtually unnecessary. Unfortunately, quantities picked in 2019 on the Côte de Nuits are lower by about a third than those of 2018, due to the delicate vine-flowering period and the lack of rain during the summer.
The exceptional maturity and perfect healthiness allowed us to produce wines that are at the same time rich, pure and concentrated, but also with remarkable freshness and balance.

In summary, 2019 is in the same line of vintages as 2015 and 2018, a vintage of well-accomplished maturity giving dazzling wines, with well-rounded tannins and exceptional concentration.

An agreeably fresh and bright nose is comprised primarily by notes of earth and various red berries. The nicely vibrant and well-detailed middle weight flavors exude a refreshing salinity on the mildly rustic and warm finish that is sufficiently structured to repay a few years of cellar time.

Slightly more elegant and cooler aromas speak of essence of red currant with discreet spice nuances. The pure, racy and lightly stony flavors possess a more refined texture along with solid depth and persistence on the mildly rustic finish that also displays a hint of warmth. ♥

This is aromatically similar to the straight Hautes Côtes cuvée with perhaps just a bit more layering. There is however a noticeable difference on the palate as the medium weight flavors are both sleeker and finer with a beguiling intensity to the more mineral-driven finish where again a hint of warmth gradually emerges. This is very good and worthy of your interest plus it should repay 3 to 5 years of cellaring. ♥

Discreet wood influence is present on the more deeply pitched aromas of plum, spice and various dark berry scents. The medium-bodied flavors possess excellent volume with more evident power and punch on the moderately rustic and sneaky long finish. This is a big and rather serious wine by the standards of the appellation and in contrast to most wines from the Hautes Côtes, it will need at least a few years of patience. Excellent. ♥

A discreet dollop of wood toast frames the spicy aromas of plum, cassis and exotic tea. There is again fine volume to the rich, velvety and seductive middle weight flavors that possess very good punch that carries over to the succulent and sappy if mildly austere finale. This is lovely and very Vosne. ♥

Reduction knocks down the nose today but there is good freshness and zip to the finer middle weight flavors that are at once sleek and delicious while displaying evident minerality on the dusty and slightly angular finish where a touch of rusticity appears. This is quite firm and will need at least some patience to become more approachable.

Here the nose is firmly reduced though the underlying fruit does seem ripe. There is fine punch, mid-palate density and delineation to the medium weight flavors that offer good richness as well as fine length on the moderately firm, dusty and lingering finish that is only mildly rustic.

A (…) notably ripe nose combines notes of plum liqueur and dark currant with those of warm earth and wood toast. The medium weight flavors are also quite rich and suave with reasonably good energy on the (…) finish.

A ripe yet airy nose features notes of black cherry, cassis and an appealing whiff of spice. There is unusually good volume and richness for the lieu-dit along with good minerality and length. This does need to develop more depth to merit the upper end of my projected range but it’s already quite pretty.

Rich and pure aromas of black fruits, coated with fine woody notes. Nice, dense juice, both fatty and fresh, with a good length.

Moderate wood sets off equally ripe is not quite as fresh aromas of black currant, plum, raspberry and prominent earth. The succulent and nicely vibrant medium-bodied flavors are both seductive and suave, all wrapped in a saline-inflected finale that exhibits only a touch of rusticity.

A very ripe nose reluctantly offers up notes of roasted plum, warm earth and cassis. The suave, concentrated and sappy larger-scaled flavors coat the palate with dry extract while the powerful and serious finish reflects nuances of warm and wood. Patience strongly suggested.

More discreet wood influence is present on the slightly less ripe but spicier and more floral nose displays fresh fruit that derives more from the red side of the fruit spectrum. There is both very good intensity and density to the powerful and tautly muscular flavors that culminate in a robust and impressively persistent finish. This isn’t an elegant wine, but it offers much to like in an age-worthy package. Patience again advised. ♥

This is also reduced but the fruit definitely seems ripe. More interesting are the energetic, detailed and solidly concentrated middle weight flavors that conclude in an equally powerful and lingering finish where a trace of warmth slowly becomes apparent. This is a relatively robust vintage for Clos des Réas and one that should age well over the mid to longer-term. Worth a look. ♥

Moderate wood suffuses the ripe aromas of warm earth and red and dark currant that flash touch of spice and underbrush. The suave, round and delicious medium-bodied flavors possess reasonably good concentration as well as fine length on the youthfully austere built-to-age finish. This will need extended cellaring to reach its peak.

The 20 ares of clos of the estate produced only 600 bottles in 2019. A beautiful grand cru with a purplish color, fruity, toasted aromas … The wine is still firm, but full, deep, harmonious, promising.